The Association’s aims are:

To foster the esprit de corps which has existed in the Battalion since its inception and its early existence as a Citizen Military Forces Special Conditions Unit.

Maintain the comradeship and association which all have enjoyed over a long or short period of time as a member of the 1st/19th Battalion, The Royal New South Wales Regiment and to maintain continuing links with the Battalion and to assist the current Commanding Officer for the time being in anything he may wish to do.

Thanks to the former Association Patron, the late Lieutenant Colonel Terry Irwin and the Orange Ex Services Club, we have an
Association Banner.

The banner was officially presented at the Orange Ex Services Club on Saturday 8th March, 2000 by LTCOL Irwin. 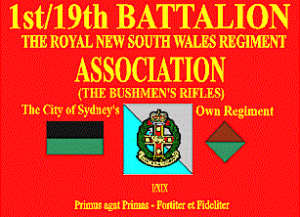 How the Association was Formed.

Its continuing association between past and present members is fairly unique.

Patrons of the Association are former Commanding Officers.